There really is no such thing as Art. There are only artists.
– E. Gombrich

We don’t see things as they are, we see them as we are.
– Anais Nin

The “beholder’s share” (originally “beholder’s involvement”) concept was developed by art historian Alois Riegl, and his great disciples Ernst Gombrich and Ernst Kris. They described the workings of the mind of the viewer (the beholder), including decoding the visual information, determining its meaning, understanding it, and interpreting it – depending on one’s prior life experiences, emotional memories, and idiosyncrasies.

Rene Magritte said once, “Everything tends to make one think that there is little relation between an object and that which represents it.” Magritte’s painting, ‘La Clairvoyance,’ which was a part of the recent MoMa exhibition, The Mystery of the Ordinary, confirms his words. In this picture, we see the artist sitting at the easel, looking at the egg on the table, while painting not the egg, but the bird (!) with its wings extended and ready to fly away. In other words, the artist is painting what this egg will become, and not what the visual percepts (the oval smooth contour and the solid white color) allude to. This picture is a great representation of the concept of the beholder’s share, the very unique share that each separate human mind brings to the “opinion table.” While none of the opinions could be measured and compared, and all of the opinions are “valid,” they represent one’s own creation. 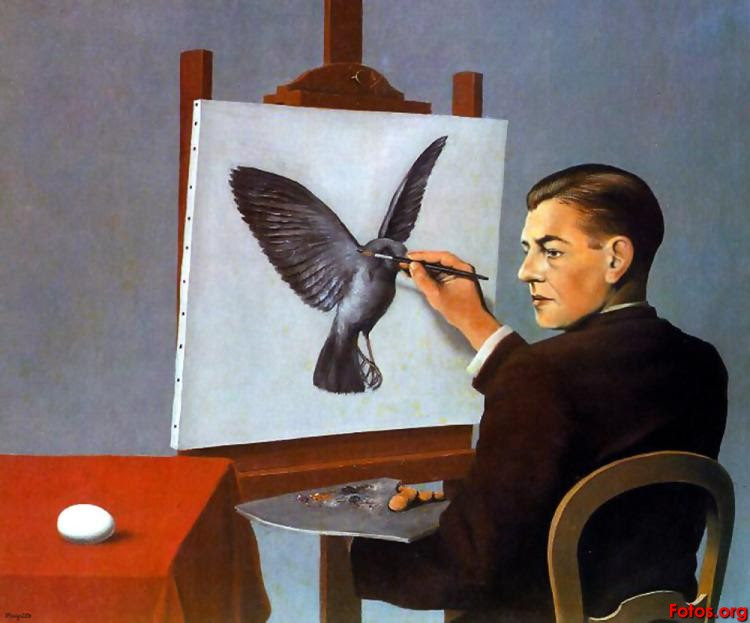 The Nobel Prize laureate neuroscientist Eric Kandel tries to tackle the issue of the beholder’s share – from the scientist’s and the art lover’s points of view – in his 2012 book, The Age of Insight: The Quest to Understand the Unconscious in Art, Mind, and Brain. His book is not just a psycho-historical endeavor; it is not a textbook, where all the theories are provided and are proven; it is not a memoir. This book stimulates one’s mind to connect the dots and to find one’s own answers, the answers which might be proven “wrong” after a while, but which contribute to one’s personal development, one’s “work-in-progress.”

Kandel, who had to make a choice once – between psychoanalysis and the hard core neuroscience – made his choice in favor of science, and now, he shares with us the production of his cross-pollinated mind, his beholder’s share. “…[P]ainting is not complete until the viewer responds to it…,” says Kandel. In his interview with BigThink after the book was published, he admitted that we actually don’t know what exactly the “beholder’s share” is. Then, he proceeded to say that our knowledge of brain pathology (or brain conditions), traumatic or not, provides us with some “outline” of what the beholder’s share possibly is, and what kind of processes are involved in it.

In The Age of Insight, Kandel offers the tour on neuroanatomy, especially on neuroanatomy of the visual system, which is very important in our perception of visual art: the images created in our brain are not the same as what we ‘perceive’ when looking at the object. In other words, the vision is the information processing, and not the image transmission! What our visual receptors perceive is called (by the modern visual neuroscientists) “a percept” rather than “an image.” Then, our brain runs the percepts through the labyrinth of its unique memories of prior experiences, emotional responses, and mirror neurons, and it creates the image, which we decide to like (and empathize with) or to hate; to put it on a pedestal or to throw it into the waste basket. As Kandel wrote in NY Times after The Age of Insight was written, “the real ‘eye’ of the beholder is the brain itself.”

Abraham Maslow said in 1966, “I suppose it is tempting, if the only tool you have is a hammer, to treat everything as if it were a nail.” In his book, The Psychology of Science: A Reconnaissance, he praises science for providing us with the ability to measure, compare, and verify things in the quest for “truth” regarding some specific parts of the whole; to get to the Weltanschauung, the “world view” – or the point of view, depending on interpretation. But, the same Maslow confirms that “this impersonal model failed with the personal, the unique, and the holistic. Nor has an alternative model yet been offered to deal validly with the fully human person.”

When dealing with the whole person, as Maslow saw it, science has to abdicate because of its “hidden but fatal weakness – its inability to deal impersonally with the personal, with the problems of value, of individuality, of consciousness, of beauty, of transcendence, of ethics.” Then, he talked about the modern process of “trans-humanizing science.” He spoke of the “unfortunate” circumstance that Freud, who was a scientist and a humanist, was raised in the times of 19th century science, with its limitations related to determinism, causality, and “reductiveness.” Most of Freud’s followers of those times were not scientists, so they could not contribute to the subject of “trans-humanizing” science by some constructive criticism; they just shied away from it. Kandel does not shy away, but does the opposite. His tools include not only the neuroscience, but psychoanalysis and his love for arts, and his socio-cultural roots. His book is an example of “trans-humanizing science,” as he shares with us his beholder’s share.